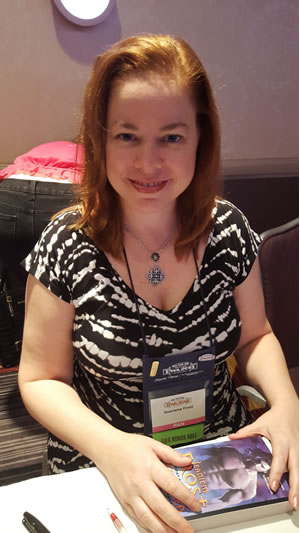 Jeaniene Frost (born 1974) is an American fantasy author, known for her work on the ''New York Times'' and ''USA Today'' bestselling ''Night Huntress'' series and the ''Night Huntress World'' novels. Foreign rights for her novels have sold to nineteen different countries.

Frost first came up with the idea for the ''Night Huntress'' series after dreaming of a couple arguing. "In my dream, I saw a man and a woman arguing. Somehow I knew the woman was a half-vampire, the man was a full vampire, and they were arguing because he was angry that she'd left him." This formed the basis for the second book; the first book details the circumstances under which the couple was separated. The series spans seven books, not including the series spinoffs. Up From The Grave was the last Night Huntress book. Frost gives a [http://jeanienefrost.com/2013/08/the-grave-stops-here/ detailed explanation] of why she ended the series at book seven instead of the planned eight or nine on her website. Provided by Wikipedia
Showing 1 - 2 of 2 for search: 'Frost, Jeaniene, 1974-', query time: 0.01s
List  Tabulka
Search Tools: Get RSS Feed — Email this Search —
Loading...